Every couple of months during the years my family lived in Stockton, Dad would decide it was time to go to Dinuba to see his family.  On the appointed day, the four of us—Mom, Dad, my sister Nita and I—would climb into our big roomy Buick, back out of the drive and head out to Wilson Way.  Turning south, we would drive through the nondescript, stop-light punctuated commercial strip to the south edge of town where Wilson Way turned into Highway 99.  Commercial buildings now began to give way to farmland.  The ugliness of Wilson Way was behind us; ordinary life was now behind us.  We were now truly on our way, on the road that would take us to Dinuba.  Up ahead was the family—aunts, uncles, cousins, my Grandma and Grandpa Willems.  We would be guests, special people.  We would sleep at other people’s houses.  Grandma would make zwieback and chicken soup with homemade noodles.  There would be laughter and stories and singing.  Dinuba, my favorite place in the whole world, the place I longed to live.  Dinuba.

Posted by Loretta Willems at 12:57 PM 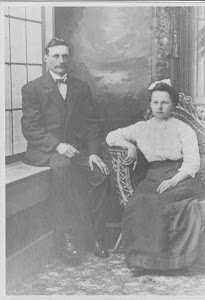